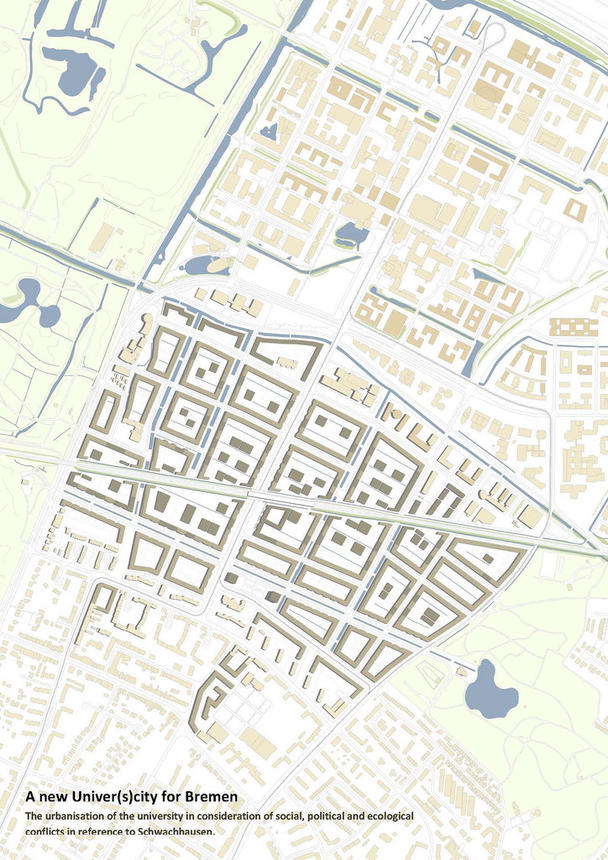 I. Historical facts
Since 1971, Bremen has become known as a university city but the idea of a well-situated campus in the midst of the city failed. Instead, the campus has been built seven kilometres from the city centre. Over the last 50 years, the same problem has arisen in other large German cities where universities have been built in a long distance from the city centres. The University of Bremen is one of many universities that have been founded in the 1960s. Since 1965, there have been a number of plans to improve the university’s integration with the town but most of them have not been realised in their entirety. Some of those projects have been carried out in recent years and included separating the campus from automobile traffic, building the technology park in the north of the campus and a residential area in the east as well as laying out a green area in the south.


II. Localisation
The objective of this Master's thesis is the restructuring of an area south of the campus. The intention is to create a connection between the campus and the middle-class urban district of Schwachhausen through intelligent urban planning. Currently, there is an area of 60 hectares in between both quarters that is used by the residents as an allotment colony. It is divided by the rail connection Bremen to Hamburg that reinforces the separation of the two parts of the city. To the west of the planning area spreads Bremen’s municipal park, the Bürgerpark, whereas the quarter of Riensberg and its cemetery are located to its east. The idea of converting the allotment colony into an urban district does not stem from an antipathy towards green areas in the city. Instead, the restructuring addresses the social issue of the separation of the wealthy Schwachhausen residents on the one hand and the students on the other hand by creating an area for the opportunity of ex-change between both social groups.


III. City planning
a) The concept of the streams
The periphery around the campus is characterised by ditches. Most of them flow into the stream Kleine Wümme that runs along Universitätsallee and later becomes the river Wümme, which ends in the river Weser. The ditches are very important for Bremen’s vegetation and especially to transport excessive rain water. Bremen has a low altitude and high precipitation which increase the risk of inundations. The project includes the preservation and conceptual adaptation of the ditches. However, despite the changes the surface of the ditches remains the same.
The new city planning includes four streams each of a width of seven to ten metres that flow from the south to the north. The starting points are alongside the railway and the newly created boulevard near the already existing buildings of the campus to the north of Schwachhausen. Furthermore, there are three small streams with a width of a maximum of two metres, that flow from the Bürgerpark in the west along the boulevard and on both sides of the railway to Riensberg in the east. All streams open out into the Kleine Wümme. Due to the differences in length, width, and location the water circulates. In addition to that concept there are also small ditches integrated in the courtyards to protect the basements of the buildings from inundations. Furthermore, the water can be recycled. The depth of the streams varies between 1 and 1.5 metres. There are two important points to cross the railway by the water. In these cases, it is necessary to use an inverted siphon that is installed below the rails. It is designed in accordance with the physical principle of the communicating vessels after which a higher water pressure in the pipes caused by reducing the pipe cross section avoids accumulated waste.

b) The functionality of the infrastructure
The infrastructural development aligns with the new design for the streams. Therefore, the streets follow the development of the streams in nearly the same way by opening up to every new building. They lead the traffic to the major roads near the planned area. There are infrastructural arrival points in every geographic direction: Universitätsallee in the north, Kulenkampffallee in the south, Parkallee in the west, Hermann-Henrich-Meier-Allee in the east. Almost every newly planned street has two lanes. However, the Bibliothekstraße, which runs through the central area of the campus, is broadened into a four-lane street up to Kulenkampffallee. In addition, the tram follows this expansion. Currently, the terminal stops of the tram line 8 is located in the street Kulenkampffallee. There could be another connection between the tram lines 8 and 6 which leads through Riensberg. Since tram line 6 is the only direct public transport connection from the city centre and the central station to the university and therefore usually used to capacity, such an extension of tram line 8, which also crosses town, could help reduce the high numbers of commuters travelling with tram line 6. Another four-lane street including a commercial boulevard connects the Parkallee and Riensberg. It opens up a straight view from the Waldbühne at the edge of the Bürgerpark and the cemetery chapel of Riensberg.
Two already existing tunnels beneath the railway offer pedestrians, cars, and trams to pass below. For completing the infrastructural idea, two more tunnels are necessary to reduce the distance of 1.4 kilometres from the Bürgerpark to Riensberg and create a better connection for the traffic between the university and Schwachhausen. Furthermore, the traffic that leads to the motorway A 27 will be split.

c) The integration of free spaces
There are two characteristic places integrated in the city planning: a boulevard with a free space on the one hand and on the other hand a newly installed train station.
The train station is next to the crossing of the railway and the Bibliothekstraße. It opens up on both sides of the railway to Bibliothekstraße and the next newly integrated road in the east. It is possible to get quickly and easily to the important places in this area: university, residential zone of Schwachhausen, cemetery of Riensberg, and Bürgerpark. A connection to public transport including the expansion of tram line 8 is given. In front of the railway station is a small free space located to lead the passengers to an adjacent supply centre and the newly designed boulevard.
In the middle next to the boulevard is a large public place of about 2,100 square metres. It abuts the existing buildings of Schwachhausen in the south and is connected to the stop of the new tramline. The square is characterised by two landmark towers with a height of 24 and 36 metres in an area with a strict structure of buildings. They represent the historical and social development of the university and Schwachhausen. The exact positions of the buildings are near the border of the public place and mirrors how the university in the city of Bremen has been placed in the 1960s. The towers are designed for public use. The contrast in height of the two towers symbolises the social polarisation between the middle-class residents of Schwachhausen and the students. The free space planning demonstrates the city planning ideas as an abstract miniature. A walkway from the north to the south divides the square like the railway separates the campus and Schwachhausen. Another walk-way from west to east crosses the separation and creates a connection between the two towers. The four zones of the place with their bodies of water and green area are based on the ecological concept of the city planning.

d) The design of the buildings
The building structure of the conceptual design consists almost only of perimeter block developments. The alignment is based on the course of the streams and streets. It is drafted into a mixed area of apartment houses and industry. A variation of both kinds of function is shown by the enclosed floor plans and elevations. Furthermore, the industrial sites within the courtyards are positioned to shield the apartment houses from the acoustic noise of the railway by forming a natural noise protection without using a wall. In view of the fact that the railway divides the campus from Schwachhausen, the blocks aren't closed on both sides to the railways which supports the merging of both districts.
The planned buildings in the south of the area are adapted to the existing houses in Schwachhausen under the influence of the distance space and parcelling. The extended street where the tram runs, and the boulevard should be commercial zones with businesses and shops on ground floor level and apartments above. The convexities in the building structure of both streets are designed to lead the residents and employees of industry and trade to the buildings’ courtyards and parking spaces.
The apartments on both sides of the big streams have attic floors with roof terraces. The width of the terraces differs between two and four metres to give the view of the buildings in an abstract way an organic form like water. The industrial parts of the buildings do not have terraces.
The ensemble of three buildings adjacent to the Kleine Wümme are designed for the use of the university and are in their structure adapted to the course of the stream.
Alongside the Bürgerpark the buildings are especially designed as simple residential buildings and not in the extravagant style of the existing mansions along Parkallee.
All buildings except the two towers of the free space next to the boulevard have a minimum of three (expansion of the university) or four floors and an additional basement or a lower ground floor.