INSTITUT DER STADTBAUKUNST
Ein Forum für Architektur und Städtebau
Hochschulseminar – Miteinander der Städter
From Nimby to Bimby
Martin Bertram, Arne Schulte, 01.03.2016
„From NIMBY to BIMBY“ describes a process for a recompaction of the suburbias and villages in france, originated by the architects Benoit Le Foll and David Miet. Both terms stand for positions, which are concerning the privately owned home and the private estate. For the first time, the term „NIMBY“, an acronym for the phrase „Not in my back yard“, appeared in the year 1980 and describes the position of citizens, who want to transfer problems and discomforts from their periphery to another location. In the beginning, the protest were only against the storage of atomic waste and the installation of industrial areas, but now the position turns against any changes or advances near by the own home.
The initiative „BIMBY“ (Build in my back yard) was not constituted to confront the „NIMBY“- position, but by the uses of the spaces for housing. Constituted by the terms of a competition from the national research agency of france for the aim of developments for the sustainable city, hte two architects act against the urban sprawl of france with their project. The urban sprawl develops by the dependings of surfaces from one-family dwellings. Those houses need an area about 1000 square meters. Because of this the architects used the big estates to tear it into two pieces and build a new house on the new area. The owner of the existing building and whose estate could sell or let the new surface and make an economic success because of the amplification of the value from the original area. The first try in the suburbias of Paris ended in the constitution of a „NIMBY“-Movement, because Le Foll and Miet made plans on their own of the areas. They presented their plans to the citizens of the town but those was of the mind that the commune want to take their estates and create council houses.
In the next step they consulted the residents and develop an democratic process of planning. The citizens could decide about the plans of their areas and about the design of their own and about the new house. Because of that, the two architects took use from the position of „NIMBY“ and could develop their project „BIMBY“, which is an allusion to the fromer acronym. After three years the project „BIMBY“ have been come to an end but in these time, the initiative became independent and found usea in urban policy and citizens in france. 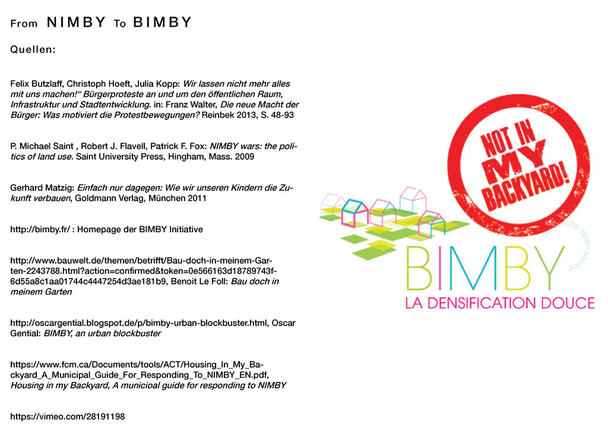